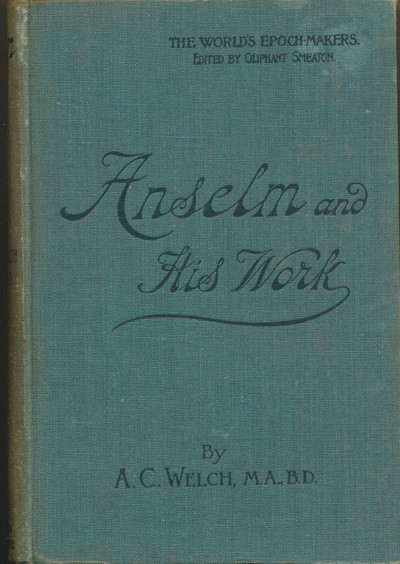 Anselm, bishop of Canterbury from 1093 to 1109, is probably best remembered for his work Cur Deus Homo? – Why Did God Become Man? In it he attempted to explain the atonement in terms of the medieval feudal system. Adam Welch makes clear his significance in church history, noting that he is even credited as the father of Scholaticism by some scholars. This title is in the public domain.

Europe in the early half of that eleventh century into which Anselm was born was renewing itself under the influence of a quickened religious spirit. Christianity in the Western world had two great outward struggles with paganism, the first with a paganism which was already in possession and was rich in the accumulated treasures of an older civilisation, the second with a paganism which sought to repossess itself of Europe and to overwhelm in barbarism the new order almost before it had struck root. The early incursions which broke down the Roman Empire had hardly been survived, and their influence had not been assimilated, before an equally heavy storm burst upon the West. The Avars from Asia, ever fertile of men, thrust themselves into the centre of Europe, and wasting everything on their way penetrated through Austria….

That the so-called “Dark Ages” contained a surprising amount of light soon becomes clear from the pages of this second volume in the Paternoster Church History. Even the Medieval Papacy, whose rise and fall is, broadley speaking, covered by the period of this book, and which became a laughing-stock and was treated as a scandal,…

This is a brief sketch of the life of Saint Anselm of Canterbury written by the Dean of St Paul’s Cathedral, Richard W. Church. My thanks to Book Aid for making a copy of this public domain work available for digitisation. Richard William Church [1815-1890], Saint Anselm. London: Macmillan & Co., 1885. Hbk. pp.303. [Click…