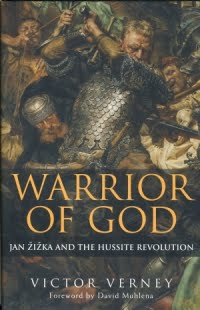 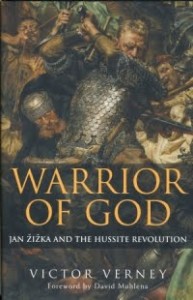 When I was first offered a review copy of this book I was somewhat surprised, because the publisher specialises in military rather than religious history. Having read the book I would have to say that it would be a great shame if this meant that those interested in medieval and reformation history overlooked it because of its publisher.

The book covers the life of Jan Zizka, a man instrumental in the survival and the success of the Hussite revolution in Bohemia following the martyrdom of Jan Hus. The introductory chapter places the story of the Hussites in the larger context of the political and religious turmoil of the 14th Century, while chapter one introduces Zizka and explains the significance of his military innovations. Zizka proved to be a genius at utilising whatever was at hand in warfare. At this time the significant role in battle was conducted by opposing knights. These engaged one another on horseback as they saw fit and the peasant infantry served mainly to be mowed down by the cavalry.

Faced with a situation where his forces consisted almost entirely of peasant infantry Zizka equipped them by converting their wagons into mobile fortresses and (literally) turned their pruning hooks into swords and a variety of vicious clubs and other weapons. Faced with Zizka’s battle wagons drawn up in formation strategically utilising the terrain, cavalry charges proved useless and knights were forced to dismount and attack on more equal terms with their opponents. In such circumstances the knights were invariably routed.

Chapter 2 describes the career of Jan Hus and includes this significant passage which is worth quoting in full:

Before being burned at the stake, Hus declared ‘You are now going to burn a goose [the meaning of his surname] , but in a century you will have a swan which you can neither roast or boil.’ Copies of Wyclif’s writings were used to kindle the fire. One hundred and two years later, Luther posted his theses, and today the swan is a symbol of many Lutheran churches. The seeming prescience of Hus’s remark, served to heighten his saintly stature with subsequent generations of Bohemians, and Protestant iconography commonly connects Wyclif, Hus, and Luther. Has Hus lived longer,he would have presided over difficult times for his followers, and his memory might be less revered. Some feel that Hus left the historical stage at the proper time and in the proper manner to ensure everlasting fame respect. A living Hus would have been a valuable voice for the movement, but the dead Hus embodied a spirit of pride and resistance, inspiring the Hussites and steeling them for the coming doctrinal a military assault upon their beliefs. [p.36]

These military assaults came from without, in the form of the five anti-Hussite Crusades, and from within as divisions in the Hussite cause led to discord and civil war. The brutality of these wars – on all sides – was incredible and one has to remind oneself that the Hussites were literally fighting for their lives as their “heresy” was a capital offence. Through Zizka’s leadership the Hussite armies finally subjugated almost all of of Bohemia and after his death invaded Moravia and Austria.

Victor Verney does a splendid job of translating the incredible complex events of this period into an engaging account that is a delight to read. He describes the origins of the various Hussites sects, the Orebites (Orphans), Taborites, Pichards, Adamites, etc. in such as way that one is able to understand clearly the historical and religious context of each.

Towards the end of his book Verney sums up the significance of the Hussite revolution in these words, which again are worth quoting in full:

Continual Hussite victories also sowed widespread religious doubt, ultimately more subversive to Rome than their military incursions. Many could not understand why, if they were fighting for God as the Pope, the Emperor, and their nobles and clerics kept assuring them, they kept losing. If the Hussites were indeed sacriligious heretics, why was God permitting them to enjoy such success? These widespread misgivings about the Vatican’s omnipotence and righteousness prepared Central Europe for Martin Luther a century later. The Hussites, particularly Tabor, exploited this by distributing thousands of pamphlets throughout Western Europe, explaining themselves and making their case – a remarkable exercise in mass media four decades before Gutenberg’s printing press. [p,222]

In summary, I would like to highly commend this book to anyone interested in medieval and reformation history and hope that it becomes required reading on all courses dealing with these subjects.